First I attacked a patch of ash and sycamore saplings with loppers. I looked on as a holm oak was toppled and then I helped cut up the branches and stash them out of sight behind a large gravestone. Later, I sawed down a young elder tree at its base.

Believe me, I did it all for love – for the love of trees and treescapes.

The graveyard in question was Abney Park Cemetery in Stoke Newington and I was acting under the direction of Russell Miller from the Hackney Tree Musketeers, a group of volunteers and tree experts who plant and stick up for trees in their borough.

The group grew out of The Tree Council’s Tree Warden Scheme 12 years ago and have since flourished into an autonomous organisation that engages with hundreds of people and even manages its own tree nursery.

Abney Park Cemetery is a little wilderness in the heart of Hackney with a fascinating history. One of the magnificent seven garden cemeteries of London, it was established in 1840 as a burial ground for dissenters and non-conformists, with a non-denominational chapel at its core.

But what is even more extraordinary is that the cemetery, which today is a designated local nature reserve, was originally laid out as an arboretum containing 2,500 species of tree and shrub. 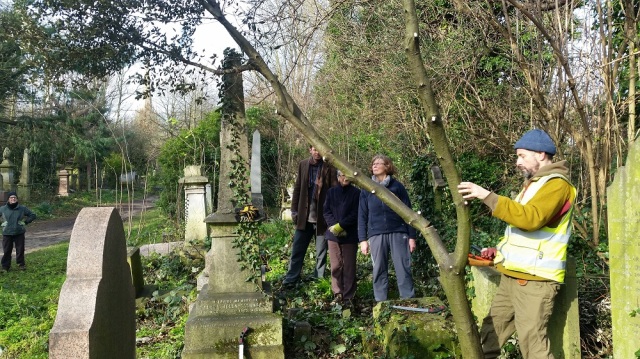 And although it felt a rather strange thing to be doing, at least to begin with, selectively felling trees is an essential part of the conservation of this remarkable urban green space.

Clearing trees from the edges of the paths, known as woodland rides, keeps access to the cemetery open and allows it to go on being as much a sanctuary for the living as for the dead.

Cutting down certain trees also helps others to thrive. Where we found a large veteran sycamore or ash, we removed some of the smaller trees nearby that would have been competing with the mature specimens for water and nutrients.

A holm oak (an introduced species of evergreen oak) had to go because it was shading out a buckthorn – one of just ten in the whole cemetery and the only species on which the brimstone butterfly will lay its eggs.

For me to have been of any help, a little winter tree ID workshop was in order. Here is what I remember: the bark of the ash is olive grey and its buds are black and arranged in opposite pairs. It’s not much, but it’s a start.

Rest assured if you know Abney Park Cemetery and love it for its wild, overgrown charm; there was no danger of it becoming sanitised through our activity.

While we worked, two groups of cyclists stopped to ask us the way out. The cemetery is a magical place in which it is very easy to become lost. Once, I could’ve sworn I walked in a straight line from one end to the other only to find myself at the gate through which I’d entered.

Russell told us an interesting fact, although there can’t be many people who could use it to guide their way across the site: the trees were originally planted around the perimeter of Abney Park Cemetery in alphabetical order – from A for Acer (the Latin for maple trees) to Z for Zanthoxylum (American toothache trees).

If I continue on this arboreal adventure of mine, then maybe, just maybe, one day I will be able to navigate my way around this cemetery/park/arboretum/nature reserve via its trees.

2 thoughts on “conservation in the cemetery”

Front door steps envy.
My daughter spotted this bumblebee on the pavement. We popped it on some clematis on a garden wall and it seemed happy.
An afternoon stroll through Avenue Orchard.
Sowing more dauntless dandelions to make up for all the ones we pick.
Snow Goose Cherry tree 🌳 blossom🌸(Prunus Umineko) on my street.
Cherry Blossom🌸 love
Loading Comments...
%d bloggers like this: