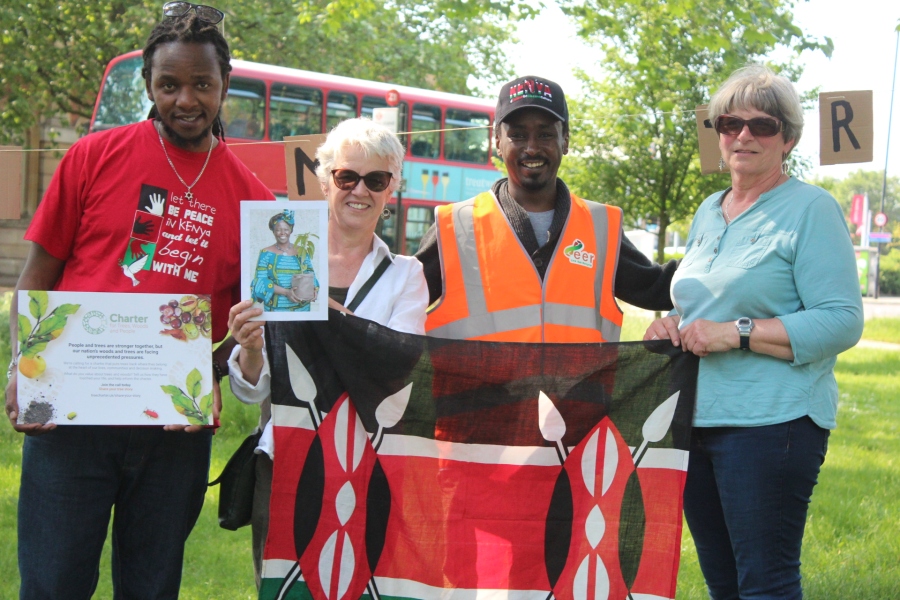 It’s the little things people do that will make the difference; my little thing is planting trees

Kenyan activist, environmentalist, and 2004 Nobel Peace Laureate, Wangari Maathai, would have been eighty years old this year. Although she lived many thousands of miles away, her legacy was the biggest inspiration behind the formation of a local community group with which I am involved – Tottenham Trees. Like Wangari Maathai, our little thing is trees – planting them, celebrating them and inspiring others to stand up for them.

Wangari Maathai grew up in the village of Nyeri in the rural highlands of Kenya. She studied Biology in the US, Germany and Africa and became the first woman in East and Central Africa to obtain a PhD. She lectured in Veterinary Anatomy at the University of Nairobi where she was the first female to become a professor and a department chair.

When she returned to her home village in the 1970’s, she was shocked at how much the landscape of her childhood had changed. The forests were being cleared at an increasingly alarming rate to make way for tea and coffee plantations; the streams were drying up; the soil was eroding away and desertification was setting in. The local women were being forced to walk further and further each day to find clean drinking water and firewood, and to watch their children suffer the effects of malnutrition.

Professor Maathai’s first thought was a simple one: “Why not plant more trees?” Trees would help to combat soil erosion, provide shade, supply wood for fuel and building materials, and produce a sustainable source of healthy food. But her next thought was ingenious: To empower women in rural communities to do the planting themselves. So in 1977, with these two ideas, the Green Belt Movement (GBM) was born.

At the time, Kenya was under the rule of the dictator Daniel arap Moi whose repressive regime had outlawed group gatherings. However, mothers were exempt from these rules because it was deemed necessary for them to meet outside their homes to share childcare. This enabled Professor Maathai, through the National Council of Women of Kenya (NCWK), to start a grassroots initiative, which supported women to grow and plant indigenous tree seedlings in exchange for a small monetary token.

The seedlings were planted in rows of a thousand to form green ‘belts’ – hence the name, Green Belt Movement. The initiative began in a few rural areas outside Nairobi and spread rapidly across the country. Since 1977 Kenyan communities have planted over 51 million trees, and in so doing, have fought deforestation, poverty and political repression.

Even when she was arrested and attacked, Maathai kept fighting for the environment and rural communities. Then, in 2002, a new democratically elected government replaced Moi’s, and Maathai became a member of the new Parliament and Assistant Minister of the Environment and Natural Resources. She went on to hold the titles of African Union Peace Ambassador, Goodwill Ambassador for the Congo Basin Forest, UN Peace Messenger for Environment and Climate, and UNEP Champion of the Earth.

In 2004 she was awarded the Nobel Peace Prize in recognition of her incredible contribution to sustainable development, democracy, and peace. She was the first African woman and the first environmentalist to receive the accolade. Her response was to plant a Nandi Flame tree, native to Kenya, and to ask her well-wishers to ‘honour this moment by planting trees’.

Wangari Maathai passed away from ovarian cancer in September 2011. In 2012 the African Union designated 3rd March as Wangari Maathai Day, to be observed in conjunction with Africa Environment Day.

Wangari Maathai and the GBM have inspired many tree-related initiatives around the world, including the UN Billion Tree Campaign, and Plant for the Planet, a tree-planting movement led by children and young people.

And, of course, a small community group based in London called Tottenham Trees…

Founder of Tottenham Trees, Margaret Burr, says: “I was inspired by Wangari’s belief in planting trees, particularly in environments where the
communities recognize their importance; not just planting by numbers but planting to enhance, celebrate and improve life. And I was astounded that the first African woman and the first environmentalist to receive the Nobel Peace Prize was so little known in the environmental and tree movement of the UK.”

Tottenham is a densely populated, heavily polluted area of Haringey in North London with a shortage of green spaces – although those that we do have are very special, such as Bruce Castle Park, home of the Tottenham Oak. It is also a very culturally and ethnically diverse place. But when I attended nature-related activities around the borough in the past it always troubled me that the participants did not reflect the diversity of the area.

Many people from BAME backgrounds in the UK internalise the belief that nature is not for them from a young age. This could be due to historical difficulties of connecting with the natural environment experienced by older generations of black and Asian people when they first arrived in the UK, as well as the lack of BAME people working in the conservation sector here. I hope that having Wangari Maathai as the Tottenham Trees figurehead sends a message that our local natural heritage is for everyone to explore, cherish and protect. (She’s on all our posters and postcards!)

Throughout 2016, Tottenham Trees gathered ‘tree stories’ from Tottenham residents to help form the principles of the Charter for Trees, Woods and People (Tree Charter). And we made sure that we talked to people from all backgrounds and parts of our community about what trees meant to them. Then, in 2018 we nominated the 500-year-old Tottenham Oak for England Tree of the Year, and thanks to the support of people throughout the area and beyond, it came Runner-up.

Wangari Maathai is not as well known in the UK as she should be, but we are pleased through our activities to have connected with another of her biggest fans right here in Tottenham – environmentalist and community champion, Robert Thairu. Robert remembers seeing Professor Maathai “standing up to police and taking a beating” on television as a boy growing up in Kenya. Years later, as he became increasingly concerned about the rising tide of plastic waste and pollution in the world, she inspired him to start lobbying for change and establish his own recycling business, Estates Elite Recycling UK.

“Since meeting the Tottenham Trees group, it has been a humbling
experience to have the honour of celebrating her exceptional work with the
Green Belt Movement and the importance of trees to the planet,” says Robert. “It’s the best feeling to know you are not alone and together we are loudest.”

He describes Maathai as his ‘Shujaa’ which in Swahili means ‘champion or legend’.

Tottenham Trees was planning several events to commemorate the legacy of Professor Wangari Maathai this year, but sadly we’ve had to cancel them due to the strange circumstances we find ourselves in. However, we don’t want to say goodbye to 2020 without paying tribute to this remarkable shujaa wangu. So, throughout National Tree Week (28th November to 6th December) we will be celebrating Wangari Maathai on Twitter. We hope that you will join us.

When we plant trees, we plant the seeds of peace and hope

To find out more about Wangari Maathai visit: greenbeltmovement.org or watch the film TakingRoot

Shaggy Scalycap
A Bat-tery powered toothbrush? (sorry)
Comma butterfly
Carder Bee on Cornflower.
A hazy morning on the River Seven
A little fairy inside a fairy ring.
Loading Comments...
%d bloggers like this: